Guess what?! We’re excited to have another great author on the blog today. But it’s also his birthday! Happy Birthday, Guy. All of us here at Heart-Shaped Glasses wish you the best! Now…onto a few questions. 😀

Do you do anything to get you into the zone to write? My problem is that the stories keep bouncing around in my head all the time so it is only finding the time to sit down and write. If I had all the time to write I’d have 100 books out instead of just three.

Which authors inspire your writing? Now that is a tough question, there are so very many…I guess for the action part of me it is the late Tom Clancy (I miss him terribly, his death was so unexpected). For passion, it was clearly Lisa Renee Jones (OMG she is the master of passionate sex). For vampires, Jeaniene Frost and her series including “This Side of the Grave” mirrors my own belief that vampires can be good and that the true evil of this world comes from politicians and their lust for absolute power.

What is your favorite book, character and why? “The Bear and The Dragon” by Tom Clancy is a story about a future conflict between Communist China and post-soviet Russia. Jack Ryan is the major character in most of Tom Clancy’s works. He doesn’t have a “six-pack” with bulging muscles; he is the mild mannered hero who uses his brains to solve problems of historic importance. I consider his “Debt of Honor,” “The Bear and the Dragon” and “Executive Orders” to be required reading for anyone who wishes to see how the United States should conduct itself and how a true leader behaves (and Jack Ryan exemplifies the character of what a President SHOULD be).

Which famous person, living or dead, are you drawn to? Without a doubt my hero for all times is Sir Winston Churchill, if there was a leader for his time he was it. Without him and R. J. Mitchell, designer of the Spitfire, I doubt England would have survived Hitler’s onslaught and if England had fallen I hate to think of what the world would have looked like today.

Where do you see yourself in five years? At my age I’ll likely be pushing up daisies in five years. However, if the Good Lord sees fit to allow me to roam the Earth I’d like to think SOMEONE will find my series of books worthy of films or television. That seems to be the only way an author has of “making it.” Although I certainly don’t write for the money, I’ll likely never make back what it has cost me to get my books published. The main thing for me was to get the stories out for people to read and understand what I am all about: Passion and love for freedom and liberty. I’m so NOT “politically correct” that leftist Hollywood wouldn’t dare produce my second and third novels into film.

Finish this sentence: I know I’ve made it when the movie of “Immortal Relations” is released.

What advice would you give aspiring writers? You will hear a lot of negatives about your writing style, content, ideas, sentence structure, ad nauseam, listen politely then write it the way you feel it so that YOU are happy with the story. You are unlikely to become rich as an author anyway so just write what you enjoy.

What do you see yourself writing in the future? I’m in the process of writing a little story for my soon to be six year old granddaughter who loves dinosaurs about her and her “pop-pop” (that is me) helping a friend build a time-travel machine and going back to look at the dinosaurs. I may not have it published as it is just something I’m doing for her. After that, I’d like to continue on with my series, Good Lord willing. I already have the cover (a close-up of an eye with a Red Iris (we all know what that means) and the title is to be, “Immortal Relations, Revenge.” If you read my third book, “Immortal Relations Coming Out” you’ll know one of those who will be seeking revenge, but there are others as well. There is your hint of what the forth book will be.

If you could have one superpower what would it be and why? Immortality, if you wish to call it a superpower. I’m very passionate and would like to share my passions, writing and otherwise, with many throughout time.

What time of the day are you at your best to write? Anytime I can get free to write I do, as for what time I’m at my best, I guess it is early morning.

And now for something completely different…

What do you look at first with an attractive man or woman, face, body or smile? With my eyesight I see larger objects first so a person’s whole body is visible first followed by their face and smile. Most people I see these days are not smiling and with what is happening in this country I fully understand why!

Explain your perfect day. Get up, kiss my wife, play with our four Pomeranians, my wife and I fix breakfast, then she plays her games on her I-Pad and I go in and write.

What is the most decadent desert you can’t say no to? There is a bakery here called McKay’s and they make a Chocolate Cake that is to die for. One version has coconut in between layers as well as on top in the center, but my wife hates coconut so she just eats around it. We both enjoy the chocolate parts.

Guy Ogan retired as a Major from the USAF in 1988 and while completing a second Masters Degree taught college courses in Counseling and Sociology while writing a diagnostic and treatment book on ADHD. He later worked for the Texas Department of Criminal Justice, developing treatment plans for addicted inmates and retired as a Psychologist. As a youth and throughout his military career, Guy was an avid athlete running both track, cross-country, marathons and participating in “Iron Man” events. He now writes Adult Paranormal-Romance Novels (something he never thought he would do). Guy has several collector and high performance automobiles but admits to driving them much more sanely than he did in his younger years. 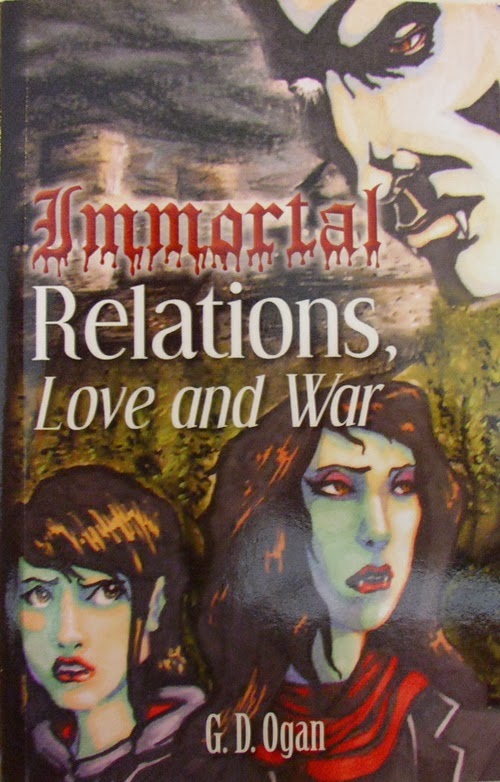 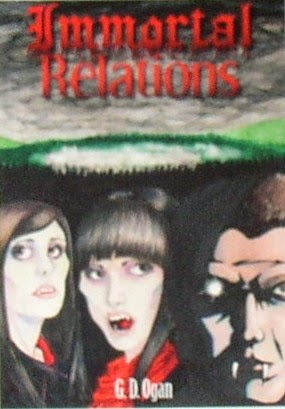 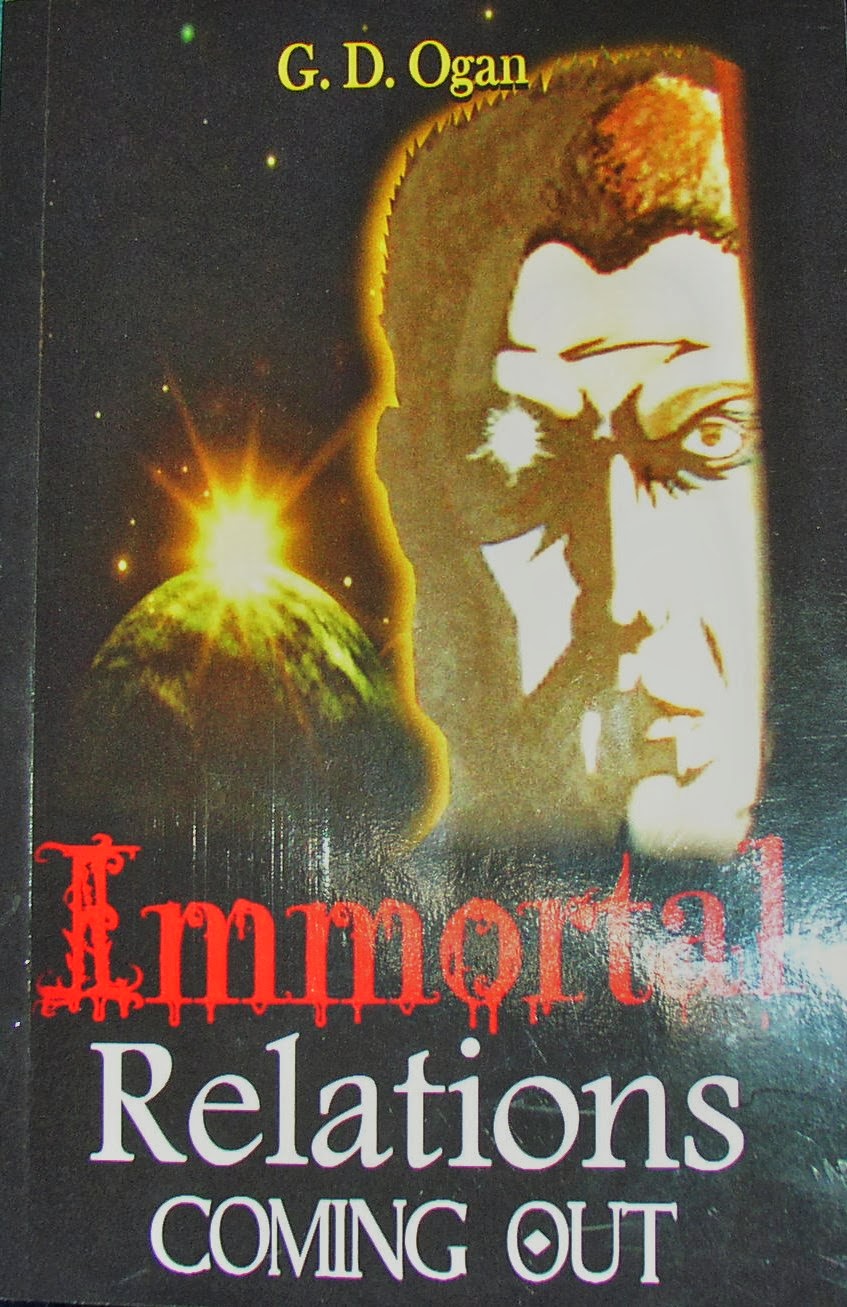 Here is an excerpt from “Immortal Relations Coming Out.” It is the scene from the wedding of the vampire daughter of Magdalena and Gary whose name is Eviana (named for her aunt Eviana, her aunt is called Evy in the book to prevent confusion). Young Eviana is marrying Victor, a human (he knows she and the rest of her family are vampires – but GOOD VAMPIRES). This is from Gary’s point of view of the events of the wedding:

We boarded several limousines which whisked us over to where the marriage ceremony would be held and there we saw many of our old friends who had been there the day Magdalena and I had wed at the same location. Our daughter Eviana had on the same dress Magdalena had worn the day she and I were married. It had a few minor alterations since Eviana was not quite as tall but had an ample bust and wanted the neckline plunging to show off one of her best features. Aside from these modifications, and the dazzling white color, it had the same haut-couture cut as the light blue, lacy, scalloped, and layered, shape-hugging dress Magdalena wore the first time we met.

When my friends had thrown us our surprise wedding I’d been so overwhelmed I hadn’t really noticed all the white flowers that I now saw and which smelled so very sweet…I think they were Gardenias arranged hanging in twists around and down the polls placed alongside as well as in the back and in front of the wedding venue. As I walked Eviana down the aisle, I could hear her thoughts of overwhelming love for Victor and the beauty of it was so intense that it was all I could do to keep from crying. I could also hear Victor’s concern that he might faint due to the picture of loveliness walking toward him and prepared to be his bride. I sent him my thoughts; Steady on young man, the ceremony will be over before you know it and you’ll have a long time to enjoy your life with this wonderful lady. If you can’t read her thoughts right now, I can and I’ll confirm her deep love for you. I am so very proud to welcome you into the family as my son-in-law! What is it the Brits say, something about keeping a stiff upper-lip? Well, just keep SOMETHING stiff for a little bit longer. Then I smiled at him and he smiled back, or maybe he was smiling as his future bride drew nigh. Whatever it was, he seemed to take courage in the stars he saw in her eyes. At this realization I could feel tears on my own cheeks.

Once again, Vladimir had a gift of a dazzling five carat Red Ruby mounted in a Gold ring. This looked to be a twin to the one he had provided when I wed Magdalena. I was sure this was also from the Hermitage collection for Victor, the groom, to place on the finger of Eviana, his bride.

There was a reception held afterwards; however I only got a parting glance of Victor and Eviana as food evidently wasn’t on their minds. Vladimir had arranged for them to stay in the bedroom at the Menshikov Palace which was completed in 1721 and was the most luxurious building during the time of Peter the Great.

Soon, Vladimir had corralled us and we were transported to the same palace where we entered a private suite of rooms that had been prepared for us. There we found Vlad, Grandmother and Roger and after hugs and kisses we sat down to discuss the wedding and what we had accomplished at the new coven we’d set up in Canadian.

I’m sure the readers have surmised the wedding of Victor, a (human) Police Inspector in Canada’s Ontario Provence to my (full vampire) daughter Eviana (named for her Aunt Evy) took place at the world famous Hermitage Museum at the behest of Vladimir Kolukov, President of the Russian Federation and close personal friend to Gary and other good vampires. There’s a lot of information on the development of the various human-vampire relationships throughout all three novels.

All three novels in the series are available on Amazon and Kindle:

“Immortal Relations” http://amzn.com/B006ZCBT6G is the first of the series.

“Immortal Relations, Love and War” http://amzn.com/B00A4IEHL6 is the second book.

“Immortal Relations Coming Out” http://amzn.com/B00G5BQS18 is third in my series.

Guy Ogan has a blog at: http://immortalrelations.blogspot.com/ and is listed on http://amazon.com/author/guyogan. While he is seldom am on “social media,” he is most active on MARSocial (a forum for authors and those interested in our works). He is vampwriter on MARSocial. His Facebook is http://facebook.com/writervampire and on Twitter http://twitter.com/thecarphotoguy1 (He used to write for an automotive magazine).

LOOK for him! and give him a shout out from the gals at Heart-Shaped Glasses. 😀