I’ve written about plotting versus pantsing before–plotting a story as opposed to writing it by the seat of your pants–but this month has given me a new take on the whole issue.

At the end of January, I joined the Winter Writing Festival sponsored by the Ruby-Slippered Sisterhood blog. It’s almost over (sadness), but if you’re a writer, you really should consider joining next year–it’s been transformative. At the same time, I’ve been taking a wonderful workshop on novellas by Catherine Chant which has given me a ton of ideas on plotting and structuring a book. I’ve also been reading Debra Dixon’s book on Goal, Motivation, and Conflict. (Apparently I’ve been busy, now that I think about it!)

I’ve always been opposed to in-depth plotting of a book before I start writing, because, well, it’s boring! But I have also noticed that failing to do any plotting at all leads to a very bad book (for me, anyway). So I did a sort of hybrid I like to call plantsing, in the hopes that with just a little bit of plotting–a moderately detailed road map, I suppose–I could let my creativity run free and still stay on course.

Well, that didn’t really work either. I still got stuck in the middle of my book, and couldn’t get past it. Now maybe it is my lot in life always to get stuck in the middle, and if so I can accept that, but maybe I really need to get past my aversion to plotting. As an experiment, the novella I am starting in March will be plotted–beat sheet, character descriptions, GMC charts, maybe even a plot arc. Will it stifle my creativity and get stuck again, or will I breeze right through? Stay tuned…

How do you feel about plotting? Any methods that work well for you, or methods you’ve rejected?

The Wedding Barn, my latest release, was so much fun to write. Here are the things I enjoyed most:
1. Planning Weddings: My wedding was 15 years ago–before the day of Pinterest and so many neat wedding ideas. My heroine in The Wedding Barn is a wedding planner, which means, I had the opportunity to create all kinds of ceremonies and receptions. It was a blast.
2. A Brooding Cowboy: The hero, Nick, was a great character to write. He had a tragic background and fights falling in love. Who doesn’t love a cowboy?
3. The Ranch Setting: I grew up on a ranch, and it’s always fun to go back to that place.
4. Revisiting Past Characters: This is the second book in my Taste of Texas series (although they can be read in any order),  and we get to take a look at where Dylan and Lucy are today.
What kind of wedding would you have if you were planning one today? 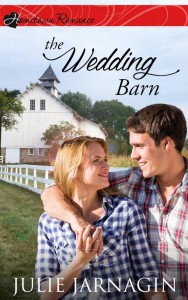 Slow down and experience life on a rural Texas ranch. And fall in love all over again…
Paige Morgan’s career is in shambles. What kind of wedding planner gets left at the altar? So when a job planning parties on a ranch in rural Texas comes her way, she jumps at it. So what if the cowboy who runs the place isn’t happy she’s there?
Rancher Nick Reid risked his heart once… and lost. Who needs love? He’s got a great life on the family ranch—so long as Paige Morgan and her city ideas don’t ruin it all. If only his family didn’t need her help to save their livelihood. And if only he wasn’t so darned drawn to the woman. But no sooner does Nick start to believe in love again, than a socialite shows up looking for Paige. Asking her to plan an elaborate wedding. Back in the city.
Both Paige and Nick need a second chance at love. But what will it cost them to take it?
Amazon
Barnes & Noble
Kobo
iBooks